Dog?Rabbit? Where Am I? What am I?

It is a well-known statement among trainers and animal lovers: The most difficult animals to work with are those that teach us the most. And we humans have SO much to learn. As a younger woman I used to wonder why the wiser among us would feel the more they knew, the less they knew. It didn’t seem to make sense. All that studying, all that life experience, contemplation and meditation to end up back where they started? How could this be? Now, I just smile because time and time again I feel that the more I know, the less I know about the wonders of life. We live in a physical world and a dimension that is parallel to another dimension that is beyond the five senses. A dimension that is invisible for the most part but one that gives us a glimmer of its existence  when we are faced with a situation that challenges our limitations and pushes us beyond them. Little Tori, a bichon rescue, turned out to be an unusual learning curve for her special Bichon foster person, Mary. 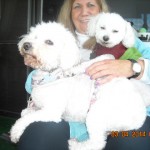 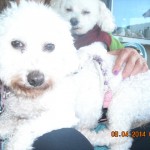 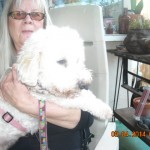 Tori held all on her own by family friend.

Four-year old Tori was brought in from the shelter to the Bichon FurKids Rescue in La Costa, CA and placed in a foster home for two months before she was entrusted to Mary for further fostering. This little Bichon appeared terrified of people. She always kept herself at a safe distance from a human and shook for several minutes if she was ever picked up. It was obvious it would take some time before she would be up for adoption and the rescue organization hoped Mary might eventually bring her around. When Mary contacted me, her hopes for adopting out Tori were low. She was even contemplating keeping her because she had made a strong attachement to her Bichon boy, Binky, nine years old. A rescue himself, Binky’s self-confidence around his home and his good nature drew in Tori like a magnet. She couldn’t be without him. On the other hand, after four months, her trust in Mary was diminishing and she seemed to be slinking away into her fears and apprehensions more and more.. Mary didn’t want to upset her further by imposing herself on Tori. They were locked in a dead-end pattern Tori created for herself. To top it off, Tori wasn’t house trained and seemed to have trouble with that concept.

Here is the transcript of my communication with Tori. It would have been too stressful for her to come to my office so we conducted the session on the phone.

BN:  Hello Tori, this is Brigitte, the One-Who-Listens. Mary has asked me to connect with you. She would like to know how to help you adjust more easily to her home.

Tori: Please let Mary know I am very happy, very content. She just needs to be more direct and “no-nonsense” with me. I do trust her but I am ALWAYS, ALWAYS, ALWAYS fearful. I have always been this way.

BN: Have you ever been mistreated by a human?

BN: What have you come in to do?

BN: What does Mary need to know that she doesn’t already know?

BN:  Mary can certainly help you with that.  What happened before the rescue?

Tori: Not much. Lived alone.

BN: Did you live with another dog?

BN: Did you live alone with a person?

BN: Did something happen to your person?

Tori: Moved away. Left me behind. Moved away. Waited and waited but never came back.
(Note:Perhaps an elderly person that went into a care facility or died, sensed grief and depression in Tori around this loss.)

BN: Mary is here to help you learn and get a new very good home for you. She will make sure to match you up correctly when you  are ready. Not before.

BN: Do you remember what you were before you came in as a little dog?

BN: I see. Now, Tori, you are a little dog. A very cute little white D O G. Remember, you are learning dog. You are a dog. Mary and Binky will teach you dog.

After a great many consults that had to do with re-incarnation in animals and cross species re-incarnation specifically, I have the data to support how instrumental they are in achieving a shift and a movement forwards for the animal and for the people involved in the present. Tori re-discovered herself through the communication process. She had been living as a white rabbit in a “dog suit.” Rabbits are prey animals with a strong fear and flight response. They associate being grabbed or held to a predator pouncing down or swooping down on them. Movements (human gestures, human walking, running etc.) loud noises (speaking loudly), direct eye contact are all sources of concern, because they broadcast danger and trigger the immediate flight response. Essentially, just living around  humans in a home was a tall order for such an animal. Even contact with other dogs could be testy and lead to misunderstandings because Tori didn’t speak “dog” either. In her world, everything would appear to have a contradictory signal or message. She understood  people wanted to be friendly but, from her perspective, they went about it all wrong. They were loud, too quick in  their movements and on the whole, unpredictable. That made her run away and shy away. Her reaction was  instinctive, motivated by self-preservation.

In the communication she says she is happy and content in Mary’s home. I’m not surprised. Mary is a compassionate, extremely caring person for people and animals. Tori understood Mary would not hurt her and she created a good little world for herself with her bosom buddy, Binky. Simply said, it was a bunny world, not a dog world. And not that tame of a bunny, either! Fear for a rabbit is a way of life, it is essential to their survival. There is nothing negative about it, however in a dog or in a human for that matter, fear of this nature is a problem. To solve this existential dilemma we needed to convert her bunny world into a dog world. The real-time experience of the consult provided her with the information she needed to make the jump (pun intended) into a new awareness. It was my hope the consult would be the gateway into her new life—Her “first time” dog life.

Before anything else, Tori asked Mary to be direct and no-nonsense in her approach. That meant that she wanted Mary to be confident in her manner. If Mary wanted to pick her up, she would do so in a direct, calm, self-assured way. Before, Mary would mirror back Tori’s fear and hesitation, waffle on her intent and let her be. This, because she interpreted Tori’s fear of contact behavior with prior mistreatment and she didn’t want to make matters worse. Mary was relieved to learn there was no mistreatment in her past. Tori, herself, dispelled that misconception in her communication. Her prior owner,  I surmise, lived alone in a quiet, consistent environment. She loved her dearly and probably didn’t make a lot of demands on her little dog. Problems arose when she lost that sheltered, protected environment and found herself  flung into the world of shelters and foster care.

Follow-up a month later: Mary and Tori have done great work together. I’ll  let Mary tell you in her own words:

Rescued from shelter in July 2013

I started fostering Tori August 9, 2013.  She had been with another foster for two months before she came to me.

When she arrived, I was told to keep a leash on her otherwise I would never be able to catch her.  She kept a good distance away from me at all times, but followed my dog very closely.  She was not house broken and never made a peep.  She would never sit near me and at night slept under my bed.  She would not eat if I was in the same room as she was.

After having a session with Brigitte:

Almost immediately after her session with Brigitte on December 12, 2013, she:

Jumped up on the foot of a recliner I was sitting in, laid next to my legs, actually touching my body.  (The one time prior to this that she jumped on the recliner, she paced back and forth at the foot of the recliner for about 20 minutes, finally jumped up on it, but jumped immediately back to the floor and left the room.)  This time she didn’t even flinch when I moved which prior to this would have sent her running.  Not only did she sit there once, but I got up a few times and when I was reseated in the recliner she would jump up immediately and lie down!!!  A few days later, she joined me again and eventually climbed into my lap and let me pet her!!!

Tori is more independent than she was, doesn’t follow my dog around so closely

She doesn’t bolt at the sight of a person moving

Most of the time at night she puts her paws up on the mattress and looks at my dog and me, but decides to sleep in the dog bed on the floor

She is now housebroken about 90%

Her personality is now coming out

Although she has a way to go, I am very impressed with the progress she has made in such little time after her session with you.  I actually think she may be adoptable in the near future.

Thank you so much Brigitte!!!

As for me, Brigitte, my heart is filled with gratitude, love and wonderment. Another good day at the office, hurray for Tori and Mary.

Thank you Sydney, Tori’s favorite Auntie, for taking the pictures. That wasn’t an easy assignment because shy Tori kept turning away from the camera. Also, a big thank you for your professional editing and proofreading skills.